It seems the old symbol wasn't frightening enough; they tested the new one on 1,600 people of different nationalities and ethnicities to see if it would make them feel uncomfortable enough to run away from the danger.

The new symbol, however, reminds me of some 1980's album cover or a stencil you might see painted on a subway car.

article at news.com
Posted by rand at 2:30 PM No comments:

I'm not a big fan of Quentin Tarrentino or Robert Rodriguez (though I think Rodriguez shows a bit more taste and talent). Their new movie is a kind of anthology that pays homage to the sleezy horror films of years gone by.

In between the "features" is an intermission with some trailers for fake horror movies made by some other directors especially for the project. The LA Times has an article about the trailers - I may just have to go see this just to check out Rod Zombie's trailer for "Werewolf Women of the SS".

article at LA Times
Posted by rand at 2:15 PM No comments:

What the heck is a mellophonium?

Well, I had never heard of a "mellophonium" until I chanced upon this interesting article about the Stan Kenton Orchestra's "Melloponium Period".

http://www.middlehornleader.com/Kenton%20Mellophoniums.htm
Posted by rand at 3:07 PM No comments:

The New York Times has an article today about the use of virtual orchestra software in live theater productions; the piece mentions Notion, a software package produced by a small start-up in Greensboro. (I have a good friend who works for the company.)

article at NY Times
Posted by rand at 10:00 AM No comments:

Continuing with excerpts from my uncle's tapes, here's a short two minute excerpt from one of his voice letters. He would send them on 3" reels of tape while he was stationed in Vietnam; on this one, recorded in August 1967, he couldn't think of much to say. So, he turned the microphone over to two of his fellow soldiers. I can't identify their names, but the first is Allen from Mocksville, North Carolina; the other soldier is from Youngstown, Ohio.

This tape was one of the few in the collection that had serious issues. It was improperly spooled and had suffered some deterioration over the years; the tape had buckled and wouldn't stay flat on side two. I gently held the tip of a cotton swap on the head of the deck as the tape played to flatten it out so it could be transferred. The sound still fades in and out a bit.

My uncle William "Burl" Flannery served in Vietnam from 1965 through 1967 with the 121st Helicopter Assault Company stationed in Soctrang. While there, he made many short "voice letters" on 3" reel to reel tapes that he would mail to the family (our family, in turn, would record voice letters for him).

Recently, I borrowed the tapes to transfer them to CD since my uncle hasn't had a reel to reel deck in many years. Included in the collection were tapes of music and other material he recorded while in Vietnam and in the early 1970's. In the blog, I'll be highlighting a few more interesting excerpts of the tapes.

One 5" reel contained a compilation of other tapes with some introductions by Burl. Titled "Songs of Vietnam", it included the following material. Each MP3 is a selection of highlights from that section of the tape and runs two or three minutes.

Pop music from Vietnam - A selection of pop records played on the Vietnamese radio stations.

Amateur singers - Recorded at a party in Saigon, highlights of some young girls singing for the microphone. One wonders what happened to them.

Sounds of war - Material recorded during a company patrol.

Vietnamese rock musicians - Recorded at the Whiskey a Go Go in Saigon just before my uncle left the country, the recording is a group of Vietnamese soldiers who performed rock music at the club.
Posted by rand at 9:36 PM No comments:

Went to the Alamance Antique Mall in Burlington and to a couple of Goodwills in town over the weekend. Here's a few of the more unusual things we saw.

First up ... a Jesus plate. Did you realize that He was so blonde? 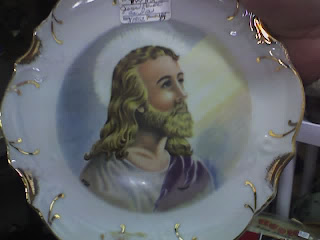 Next, a frightening whatiz to put on your wall. Are these some kind of pirates on crystal meth or something? 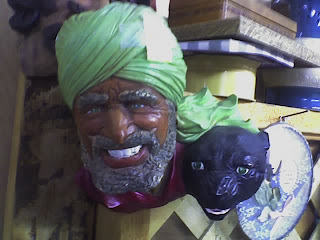 A psychodelic cow at Goodwill... 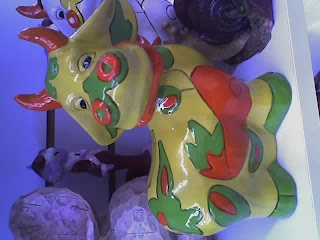 Two cookie jars sure to discourage children from sneaking a snack... 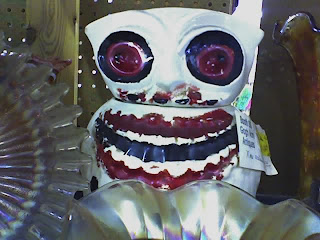 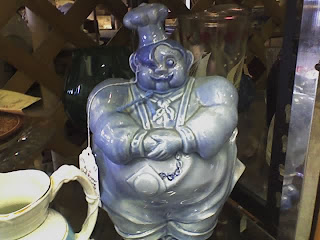 Well, I think I'm in the wrong business again. Turns out that there are companies out there charging anywhere from $40 to $2,000 to help people remake their online personal ads and help them get started with online dating.

article at NY Times
Posted by rand at 1:10 PM No comments:

Isn't it odd that conservatives in show business - particularly actors - seem attracted to politics. There was, of course, Ronnie Reagan, Sonny Bono, Arnie in California, Fred Grandy (of "The Love Boat"), Clint Eastwood and, now, Fred Thompson. Thompson was a Senator from Tennessee, but is probably most well-known for his roles in "Law and Order" and "The Hunt for Red October".

Does acting somehow prepare you to be a conservative politician?

Does pro wrestling prepare one to be a Libertarian politician?

Funny how liberals in the entertainment industry don't generally become politicians - they just buy influence instead ....

article at CNN
Posted by rand at 12:54 PM No comments:

Israel's ambassador to El Salvadore was recalled. Over the weekend, he was found on the streets naked, drunk with a rubber ball stuck in his mouth. And there were SM toys involved too.

It was the first time Rephael, who had held a technical position in the ministry before his posting to San Salvador, had ever distinguished himself in any way, the official added.

article at BBC
Posted by rand at 12:51 PM No comments:

Spam I won't be opening today #1

Received a spam today with the subject line:

"Cash Advances Based on Christian Principles"
Posted by rand at 7:49 AM No comments:

A fun one from 'The Onion'

If you're a Pagan, or anyone who has dreaded going home for the holidays, you'll enjoy this little piece from the Onion.

article
Posted by rand at 7:43 AM No comments:

The NY Times has a short piece about the mascot for a West Virginia basketball team that showed up at Madison Square Gardens for a college tournament and wasn't searched even though he was carrying a rifle.

When I first saw the headline, I thought it might have been about the Mountaineer mascot of my own alma-mater, Appalachian State University. I believe that, at least in the 1980's, the mascot there fired a rifle or musket with gunpowder during some parts of the games. (College memories are a little hazy these days...)

article at NY Times
Posted by rand at 1:49 PM No comments:

Sigh. What's the deal with these conservatives, anyway?

First there was the bruhaha about Jeff Gannon, a PR guy in conservative circles who was given access to White House press conferences so he could plant leading or easy questions for the prez. Turns out he was hiring himself out as an escort.

post at Americablog, pointing to an opinion piece at Salon where the man blames a liberal conspiracy for his outing

post at Americablog with NGLTF's spot-on press release concerning the matter
Posted by rand at 1:52 PM No comments:

Catching up with old friends

Here's a web site that collects a number of telephone interviews with many television and film personalities; they were recorded in the 1970's for a local radio show by Tom McCarthy.

Conservatives and the cult of masculinity

Found an insightful little blog post by Glenn Greenwald at Salon; the author looks at Ann Coulter's recent taunting of John Edwards and digs beneath the surface to reveal the often ridiculous "fake macho" cult of masculinity among conservatives. The Village People would be jealous, indeed.

blog post at salon.com
Posted by rand at 1:32 PM No comments:

article at sfgate.com
Posted by rand at 9:01 PM No comments:

Over the past couple of years, there's been a number of interesting documentaries out there - so many that some invariably slip through the cracks.

Here's a review I just ran into at Counterpunch.org of "Sir! No Sir!", an award-winning documentary about the GI protest movement against the Vietnam War. At the official site, you can order it on DVD and they are also running a program where you can donate to send copies free of charge to current active duty military personnel.

The documentary includes footage from Jane Fonda and Donald Sutherland's infamous "FTA" shows that were compiled into a feature film (and have never been released on video).

Official site
Posted by rand at 8:01 PM No comments:

Once in a while, I'll make a few psychohistory-related posts here. Today, I'm wondering why there are two movies featuring bikers going head to head at the box office - Wild Hogs, a comedy about middle-aged men who become bikers and Ghost Rider, which concerns a biker who sells his soul to the devil. Both films were panned by the critics, but seem to be catching on with audiences.

My own theory about biker-themed movies is that they hint at themes of journeys, standing out from normalcy or being an outlaw, and being exposed or vulnerable. There seem to be several news stories making the rounds that seem to fit these themes - police discovering a video of a 2 and 5 year old being taught how to smoke pot, the story about the "giggling bandits" or the baseball team bus crash that has gotten so much play in the news. There's also the numerous stories about the abuses at Walter Reed of vets (and we often think of bikers as men formerly in the military).
Posted by rand at 2:23 PM No comments:

Watched the "Miami Vice" movie on DVD tonight. It didn't get great reviews, but I thorougly enjoyed it as someone who thought "Miami Vice" was the coolest thing on television in the 1980's (at least until Mann's "Crime Story" came along). It has a darker vibe, but all the qualities that made the original show work well - lots of fast cars, action, style, and two buddy cops who are cool cats. I think it actually plays better in a home theater setting - on the big screen, some of the endless music video stuff might get a little tedious, but they got tedious sometimes in the weekly series too.
Posted by rand at 10:16 PM No comments:

Real or the Onion? You decide...

Have you ever found yourself reading "The Onion", then turning to a "real" news outlet and finding that the headlines are similar? I often do.

Which of the following are "real" and which are from "The Onion"? Click and find out...

Chained to the Radiator? It’s for Her Own Good

Arrests made in giggling bandits case

Where Only the Salad Is Properly Dressed

The Widescreen Museum has up some new material - an article about the remodeling of New York's Rivoli Theater in 1955 when it was reconfigured for showing films in the Todd-AO format. They did extensive remodeling to the interior, including custom made carpets and a concession stand for balcony patrons. They even had a $15,000 custom made curtain for the screen that was themed as the main, long-running attraction at the time, "Oklahoma".

It's no wonder I'm just not interested in going out to the movies anymore.

article at the Widescreen Museum (note - large images make take some time to download)
Posted by rand at 3:59 PM No comments:

Jerry Springer opera premieres in US

A Vegas group is doing the US premiere of "Jerry Spring, The Opera"; there will be two performances, staged as a benefit for charity.

article at Broadway World
Posted by rand at 3:11 PM No comments: