Here's another rarity from radio history on the blog today.

A few years ago, a good friend, Bill Blodgett, gave me a vintage Lear wire recorder. If you're not familiar with the devices, wire recorders were a predecessor to magnetic tape recorders used by the military and for some recordings of field reports by reporters during World War II. After the War, they were marketed for home and business use. They recorded audio on a thin wire moving at around 20 inches per second. After only a few years, sales of wire recorders declined in favor of easier to use and edit tape recordings.

I have up a page about the recorder and some of the wires that Bill gave me with the set on my website. Most of the wires contained recordings of song, snippets of radio broadcasts, and events like Christmas or birthday parties and neither Bill nor I know who the original owners were.

Two wires among the recordings contain a rather unusual program. The show appears to have been created, perhaps for a private party, by the staff of radio station WLAV for their tenth anniversary. Below is a link to the two excerpts found on different wires - the program is almost complete when you listen to the excerpts one after another.

The show tells a funny dramatized story about the history of the station, poking fun at WLAV's founder and owner, Leonard Allen Versluis. It also frames the "show" as a broadcast from the ABC network, so I'm assuming the station was an affiliate at the time. WLAV started broadcasting in 1940, so that would make this recording date from 1950. According to Wikipedia, WLAV-AM, located in Grand Rapids, Michigan, is now WBBL, which broadcasts with a sports-talk format.

I contacted the station about the recording, but, with the changes in management over the past fifty-plus years, they didn't know anything about it. They wanted a copy for their collection and I sent it to them.

What surprised me about this wire and some others was the quality - I've always heard that wire recorders sounded rather poor, but this rivals some audio tape recordings from the time in frequency response. The anniversary show appears to have been dubbed either from an acetate or tape made at the station.

If you ever run into old wire recordings or reels of tape, be sure to pick them up and give them a listen - you never know what might turn up.

On a recent trip to Goodwill, I found a curious little 45 rpm record set.

After RCA developed the 45 rpm record, they promoted the format as a replacement for 78 rpm album sets and singles. In the late 40s and through the early 50s, they issued album sets in various genres and promoted RCA record changers for 45s that could be hooked up as auxiliary devices to radio sets.

At Goodwill, there were a few of these sets by artists like Wayne King and Vaughn Monroe, but one caught my eye. It was called "Night Beat" and featured an NBC record label. I've heard an old NBC radio drama series by that name, but had never seen a radio show issued on 45s like this. Curious, I picked up the set and checked it out. 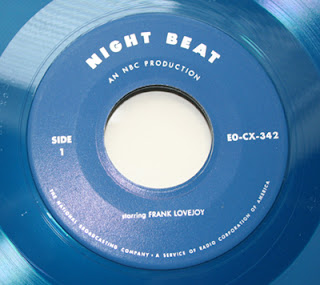 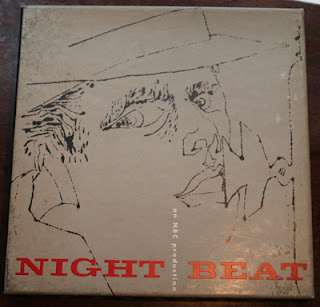 The set consists of one complete episode of the show with an announcement aimed at advertisers inserted just after the opening, inviting potential sponsors to buy time on the program. So, this appears to be a promotional set put out by NBC.

listen to MP3 of the opening and promo announcement (2 MB)

I'm guessing that someone at NBC saw it as a chance to promote the series to advertisers in the face of competition from television. Indeed, "Night Beat" was sustained, without a sponsor, for the first few months of its run.

I posted about the set on the OTR mailing list and Michael Biel helpfully provided some additional information about the set. The label and matrix numbers are EO-CX-342 through 347 and the label runoff area includes an "I" notation near the matrix number. According to Biel, "EO" is a date code indicating 1950. The "C" indicates "Custom", pressed by RCA for a special purpose (a "K" would be used if the records were custom pressed for an outside customer). Biel estimates that the master numbers were done early in the year, perhaps mid-January to early February.

The "X" in the matrix number is a problem - usually a "W" was used in this position at the time. Biel thinks this might be a holdover from the "X" used in this position during secret development of the 45 rpm system between 1940 and 1948. The "I" indication is a code for pressings done in the Indianapolis plant.

The source of the recording sounds to my ears like a 16" transcription - halfway through the show, you can hear a side change where the audio quality changes, similar to what might be heard when going from the end of one side of a transcription to the beginning of a second side.

Despite no episode title in the program or on the label, the episode on the records appears to be "Zero", the first show of the series broadcast on February 6, 1950, according to a log of the series.

Anyone have any additional info on the set or seen others like it? Was there other material, like a press kit, also released? Was it sent to ad agencies or advertising departments at some companies?
Posted by rand at 11:36 AM No comments: